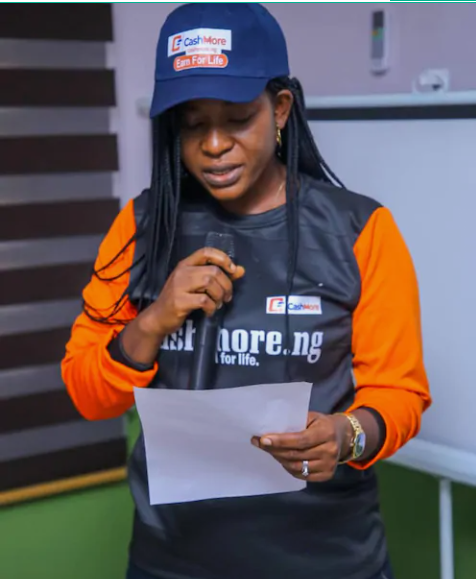 If  I’m being honest is a collection of short stories and poetry on various significant and seemingly trivial topics.

Davies Olakunle Emmanuel remarkably speaks to a range of societal issues in his distinct writing style. His divergent view of life is emphatically expressed as he employs poetic license and faith-based convictions to thrill, and present his readers with a well-thought-out perspective.

It is filled with plaintive, emotive, and rib-tickling pieces, designed to take you on a roller-coaster of emotions.

Here’s the link to get yours

Refuse to be a captive of your environment, learn proven principles on creating the right environment for growth and success.

learn how to take action to change the things you can, so they don’t stop you from having the future you want.

Join Halima Oyelade for another session of amazing insights on www.facebook.com/timeoutwithalima

Over the weekend, Adesua Etomi-Wellington turned a year older and she threw an intimate party with friends and family.

For her birthday party, the actress opted for a sparkling green gown that had her looking absolutely beautiful.

Check out the gorgeous star girl.

With nine editions under its belt, #timeoutwithhalima returns with “ Its A Goal”, as it announces the first edition of the transformational session, scheduled to hold on 1st February, 2020 at Abuja Enterprise Agency, Jahi Abuja.

In exactly a week, #Timeoutwithhalima– a program designed to expose entrepreneurs and professionals to thought-provoking and life-changing insights will return for its first edition in the new decade, with the theme – Its A Goal!! The session will unearth “secrets” for achieving your smart vision and goals for the year 2020.

Founded in May 2018 by Halima Oyelade Convener of the once in every other month program in Abuja, presents an opportunity for achievers to network and become exceptional in their business and professions.
This year’s first edition will feature an intriguing presentation by Halima Oyelade.

In addition, the session will also have an unprecedented Q& A session, creation of vision boards by participants and a live tweet chat/ trend on social media. Since its inception #timeoutwithhalima – A FREE Event has plateaued into a household name in Abuja and grown to become a launchpad for entrepreneurs and professionals to build a proactive workforce, leadership and enjoy the better life.

The Commonwealth of Zion Assembly (COZA) #12DaysOfGlory2020 which started on January 2nd and ended on the 13th was unprecedented!!! The light of God’s countenance shone on all who attended. Below are some ballistic pictures that show that God’s presence was mighty.

Children received free medical service for different medical conditions, gift packs of food. There was also the distribution of food items (Rice, oil, Maggi, salt) to widows, distribution of clothes to inhabitants of the IDPs and cutting of the anniversary cake.

Speaking at the opening of the Kids Funfair, Mercy Michael Founder of Mercy Michael Foundation noted that the reason for the Funfair was to share uncommon love with the IDPs to give them a sense of belonging, lift their spirit and encourage them to be positive regardless of their situation this festive season. She stressed that funfair was a short-term intervention to reach out to the needy at the IDP Camp.

She re-emphasizes the commitment of the organization to a more sustained initiative. She, however, placed a clarion call to Nigerians and those in diaspora to reach out to the disadvantaged in the Internally Displaced Persons camp scattered all over Nigeria.

This festive season, GTBank has launched a campaign tagged #GTBankhomecoming to give many who can’t afford it, bus tickets to make it home just in time for the holidays!

To give people the gift of home this Christmas through #GTBankhomecoming simply nominate someone: it could be a family member, a friend, or anyone who you believe needs it the most! After nominations are in, a shortlist will be made and tickets will be given to chosen nominees so that they can celebrate the holidays where the love is warmest –

Want to give someone the gift of home this holiday? Kindly visit www.gtbank.com/homecoming to nominate him or her.

Are you ready to have an amazing experience and to create lasting memories with children at one of Nigeria’s Internally Displaced Persons IDPs camp in Nasarawa State?

Mercy Michael Foundation IDPs funfair 2019 is the place you need to be!. In less than a week, the biggest IDP funfair in Nasarawa state will be live.

Anticipate a day of unrivaled fun and love sharing with Kids in Gurku IDP Camp.

Wondering what to expect at the event, here is a guide:

It is an indisputable truth that nobody knows the stomach that will give birth to a King; therefore women need to be empowered and treated with dignity and respect as much as possible.

Driven with the goal of empowering women, widows, restoring destinies and adding meaningful value to the lives of the needy and aged; SOLCHI ALTERNATIVE HOMES FOUNDATION decided to empower over 30 widows (AKA Jesus Wives) with money and various categories of food items recently in Kuje, Abuja.

Speaking on the rationale behind the initiative, founder of the Foundation Chukwuka Oluchi Stella explained that, the aim of the foundation is to give love, make life appreciable, to help individuals discover the purpose of living, maximize their potentials and to assist widows to cushion the effects and realities associated with widowhood.

“SOLCHI which means ‘following God as He leads’ was founded in 2014 as a child of necessity passionate about helping the less privileged in the society. It is conceived to be a home for orphans, distressed youths, widows and the aged that lack attention”, she said.

She also noted that the time has come for women to be both seen and heard in leadership positions, appreciating the natural and impactful roles they play in any given society can not be underestimated. She asserted that the targeted results of the home have been challenged by the lack of funds, calling on well-meaning individuals and groups to support the foundation.

A philanthropist Chris Oji decided to share uncommon love with the widows by celebrating his 54th birthday with them.

According to Oji, though happy with the turnout he was caught unawares noting that the event was ‘a pleasant surprise’. In appreciation of the monetary donations he made, the widows sang and took turns to pray that God should strengthen him to continue to excel in all his endeavors.

On his part CEO/Founder of Swift Training and Entrepreneurship Program (STEP) Business Network-an, innovative entrepreneur’s ecosystem in Nigeria and also a consultant to the foundation Michael Oladipo Aina assured the widows that they will never be forgotten in as much as they believe in the all-sufficient power of God to meet their needs.

Items distributed to the widows by SOLCHI HOMES were not limited to bags of rice, beans, garri, cartons of Indomie noodles, vegetable oil, salt, seasoning, tomatoes, laundry items and many more.